About Bloated & Bumbling Bureaucracy, Tax Reform, and the Price of Gasoline 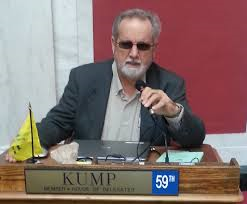 Attorney and public policy proposer Mike Caryl is, for sure and for certain, right on target with his observation that the elimination of West Virginia government's unnecessary programs and bloated management could and should eliminate our current state budget deficit crisis. Indeed, citizen legislators such as West Virginia Delegates Mike Folk, S. Marshall Wilson, Pat McGeehan, and Tony Paynter have accepted a similar challenge from the Governor. They have drafted specific "line item" amendments to the Governor's proposed budget, in order to accomplish a balanced budget that doesn't include tax increases. Mr. Caryl's also correct in pointing out that the structural economic imbalance and inefficiency in West Virginia's current and convoluted tax policies truly impede our present and future prosperity, as well as being a major contributor to our deepening economic despair. These skewed public policies even encourage our steady loss of native population and talent, as our best and our brightest "vote with their feet". That's why the encouragement by him and numerous legislators, to increase and broaden our sales tax, as a mechanism to eliminate our personal income tax and other burdensome tax inequities, should be given serious but also careful consideration. Even so, perhaps it is Mike's personal comment to me, about "those of us who can easily afford to pay" a proposed return to a sales tax on groceries, that sticks so stubbornly in my craw. The working poor and fixed income retirees are, in fact, not among " those of us who can easily afford to pay" such a grocery tax. In point of fact, it is my view that legislators and public policy makers need to have a much deeper personal understanding and appreciation of what a desperate struggle it is for many of the working poor and retirees to put food on their families' tables. That angst and heartache is not suffered by "those of us who can easily afford to pay" a grocery sales tax, nor is it or will it be suffered by those on the government dole for "Food Stamps". Finally, Senate and House of Delegates Transportation Committee Chairmen, Senator Greg Boso and Delegate Marty Gearheart, mirror my thoughts, in their opposition to the Governor's rapaciously regressive and grievously goofy gasoline tax increase proposal. Yours for better governance, Larry D. Kump www.facebook.com/LarryDKump Please share this post with others, and ask them to go and do likewise!
Posted by Larry D Kump at 10:21 AM