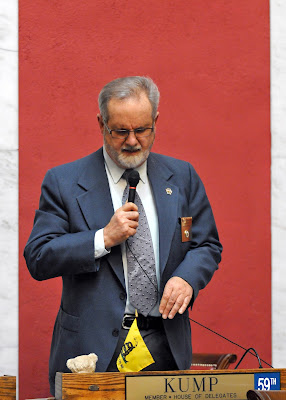 Offering the invocation at a West Virginia Legislative Session


The ongoing firearms phobia and also the current obsession with hateful and divisive "Identity Politics" by much of our national mainstream media and even some of our elected representatives continues to alarm and worry me.

These perverse perspectives of social justice endanger all of our collective and individual liberties.

Many of these folks seem confusedly convinced that undermining our "American Excellence", by trampling upon our sacred Constitutional rights, somehow will eliminate the dreadful depredations of those who are morally corrupt, malevolent, or even mentally ill.

And so it went that I continued to pray and ponder about this instant assault upon all of our citizen rights and liberties, especially those provided by those amendments that comprise our Constitution's "Bill of Rights".

Then, I remembered my days long ago, as the student editor of "The Night Crier" campus newspaper at Hagerstown Junior College, and how I was inspired by a wall poster about Martin Niemoller.

He was a German and a Protestant pastor, who spent the last seven years of World War II as a prisoner in various Nazi concentration camps.

Martin spoke contemporaneously, and different versions abound about what he said, but it went something like this:

"First, they came for the Socialists, and I did not speak out -- Because I was not a Socialist.

Then, they came for the Jews, and I did not speak out -- Because I was not a Jew.

Then, they came for the Catholics, and I did not speak out -- Because I was not a Catholic.

Then, they came for me -- and there was no one left to speak for me."


For more of this about other good governance issues, see my other posts at this site, and also visit www.facebook.com/LarryDKump.

Please share this message with others,and ask them to go and do likewise with even more others!


And, for sure and for certain, may God bless you all real good!

Postscript: My maternal Grandfather's family were German Jews.
Posted by Larry D Kump at 11:17 AM