The Board of Directors of the West Virginia Business and Industry Council (BIC) met, and you have our endorsement.

We have had the pleasure of working with you, as an incumbent legislator, and look forward to your return to Charleston.

The West Virginia Business and Industry Council (BIC) is comprised of more than sixty West Virginia trade associations and businesses which collectively represent more than 395,000 employees across twenty-six multiple industry categories. BIC is committed to working with the Legislature to come up with effective and politically viable solutions to critical issues such as economic and jobs development, fiscal responsibility, responsible government, education, and legal reform.

Email ThisBlogThis!Share to TwitterShare to FacebookShare to Pinterest
Labels: endorsements

Sharon Has a Clue

Larry,
I wish we had more people like you running for office. Hang in there, it must be a daunting task working in the legislative arena. It amazes and scares me that many of our leaders are so clueless.

With the end of the 2012 West Virginia legislative session and the state budget approval process by legislators tomorrow (Friday, March 16th), here are some points to ponder regarding just a few of the proposals considered by lawmakers this year:

SB 477 passed. It is a nineteen page bill, prompted by the recent hysteria caused by the escape of some zoo animals in Ohio. SB 477 directs the West Virginia Division of Natural Resources to establish permits, fees,and regulations for keeping "exotic" pets (including birds, amphibians, mammals, reptiles, and fresh water fish). If signed into law by the Governor, the West Virginia Division of Natural Resources will develop these rules under an "emergency" mandate. This bill begs the question, " Should it take a village to raise a ferret?". Pet owner confidence in this proposal and process ranges from "Slim" to "None" (and Slim left town). Eastern Panhandle Delegates voting for SB 477 were John Doyle, Walter Duke, Tiffany Lawrence, and John Overington. Voting against SB 477 were Delegates Daryl Cowles, Eric Householder, Larry D. Kump, and Jonathan Miller. (Roll Call #477)

With the increased mandate and burgeoning cost to taxpayers for law enforcement and prisons, no legislation was passed to reform our criminal justice system.

While there was no change in the law to make Sudafed a prescription drug, the passage of SB 437 does decrease the amount of Sudafed that can be purchased on an over-the-counter basis.

Funding was approved to increase lodging at Cacapon State Park.

For further information on all 2012 legislative issues, click on "WV State Legislature" (under "Links", on the right hand side of this webpage). Also check out the links under "Videos".

The 2012 West Virginia legislative session finally will end in the wee hours of tomorrow morning, but it has not brought much jubilation to, or even much attention from, most Mountaineers.

However, there are important governing principles and policies which should prompt us to pause and ponder what our elected leaders have been and are doing.

All of us need to better understand and stand up for what we expect from our elected leaders, both here in the West Virginia State House and in our nation's capitol.

Legislators oft are prone to attempt to pass laws, in order to justify continuance in office, and, as Shakespeare once put it, "therein lies the rub".

Not all laws are good laws, and some of this year's proposed and enacted laws should send a chill down the spines of lovers of liberty.

One egregious case in point is the federally mandated "Real ID" law, which took effect here in West Virginia this past January. It makes getting and renewing drivers' licenses a horrible hassle for everyone, but especially for women whose names have changed because of previous marriages or divorces. Most of us are not yet even aware of the true extent of this waking nightmare, but it will get up close and personal for each and every one of us when we go to renew our driving licenses.

Other examples, during the 2012 session of the West Virginia Legislature, included legislative attempts to impose criminal penalties on  previously legal activities and also increase the penalties for other crimes. All of this is going on when West Virginia has the second highest rate of prison incarceration in the nation and our local and state governments are reeling from the devastating expense of building and maintaining prisons and jails.

Additional legislative proposals this year  also sought to limit our freedom and empower government to further dictate our choices for us.

More and more folks are becoming disgusted with both major political parties. The ranks of unaffiliated or independent voters, as well as those who have completely opted out of even voting at all, are growing.

And yet, our government belongs to each of us, and not the other way around.

Please do your part, keep an eagle eye on all of us elected leaders, and always remember that the job of West Virginia citizen legislators is to work on your behalf and to preserve your liberty.

Meanwhile, visit www.wvsos.com to learn about West Virginia's 2012 candidates in the May primary election and the November general election.

Footnote:  Although the 2012 Regular Legislative Session will end after Midnight tonight, legislators also will be at the State Capitol next week to finalize approval of the State Budget.
Posted by Larry D Kump at 5:52 AM No comments:

Due to the press of numerous and competing committee meetings during this last week of the Legislative Session, the Eastern Panhandle Legislative Caucus meeting this morning was both brief and sparsely attended by area legislators.

Legislative proposals which have passed the originating chamber (House of Delegates or Senate) were reviewed.

There also was further discussion about West Virginia's implementation of the federal requirement for additional documentation for drivers licenses, which has become such a nightmare for Mountaineers, especially women who have had name changes because of marriage or divorce (see previous March 4th entry below). HB 4556, an attempt to ease these regulations, was introduced by Delegates Walter Duke, Larry D. Kump, Eric Householder, John Overington, and Jonathan Miller. Sadly, HB 4556 never even was given a legislative committee hearing.

Although the Legislative Session will end after Midnight, on Saturday, March 10th, legislators will remain in the State Capitol during the following week, in order to finalize the State Budget. 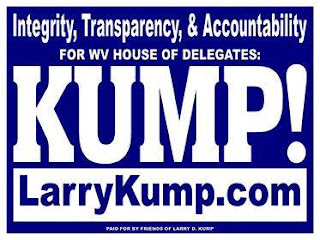