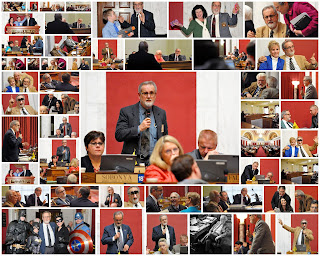 With the completion  of the "Cross-Over Day" deadline  for legislation to pass the originating West Virginia Legislative Chamber (House of Delegates or Senate), there are four bills which recently passed the House of Delegates that prompts further comment and analysis.

HJR 113 is the proposed amendment to the West Virginia Constitution that would allow individual counties to increase the amount of property tax credits (Homestead Exemption Act) given to senior citizens and the disabled. Since HJR 113 is an amendment to our West Virginia Constitution, it requires a two-thirds vote of approval by both chambers of the Legislature (House of Delegates and Senate) and then an approving referendum by voters in the upcoming November election in order to become law. HJR 113 was approved by the House of Delegates by an unanimous vote and now goes to the Senate for further consideration. Note: Although my preference is to reduce or even eliminate property taxes for all West Virginia homeowners, HJR 113 at least has the potential for providing much needed property tax relief for senior citizens and the disabled.

HB 4263 is the  West Virginia Buy American Act  proposal, which callously trades upon a popular slogan and our national pride in order to increase the cost to taxpayers for public building projects. Instead of simply requiring contractors to make a reasonable effort to use American made products in  public project construction, HB 4263 establishes a complicated "Rube Goldberg" set of approval rules for the use of  construction materials. It also could require taxpayers to pay contractors  much more than normal competitive prices for those construction materials. Even worse, the rules set by HB 4263 are so byzantine and stifling that it even actually could discriminate against West Virginial contractors and cause them to lose business because they cannot readily obtain American made project materials.  HB 4263, despite its good intentions, is not a jobs creation bill. It actually could do much more harm than good.Contractor and Delegate Daryl Cowles (R-Morgan County) made valiant attempts to correct (amend) some of the worst inequities in HB 4263, but was voted down (Roll Call #136: 33 yeas, 62 nays, and 5 not voting; Roll Call #137: 31 yeas, 64 nays, and 5 not voting). Eastern Panhandle yea votes for both amendments by Delegate Cowles were Delegates Daryl Cowles, Walter Duke, Eric Householder, Larry D. Kump, Jonathan Miller,  and John Overington. Voting nay on both amendments were Delegates John Doyle and Tiffany Lawrence.  HB 4263 then passed the House of Delegates (Roll Call # 159 : 82 yeas, 16 nays, and 2 not voting ). Eastern Panhandle votes against passage of  HB 4263 were Delegates Daryl Cowles,  Eric Householder, Larry D. Kump, Jonathan Miller, and John Overington.Voting for passage of HB 4263 were Delegates John Doyle, Walter Duke, and Tiffany Lawrence.  This legislation now goes to the Senate for further consideration.

HB 4281 would provide a modest salary increase for State Troopers and unanimously passed the House of Delegates. It now will go to the Senate for further consideration.

Meanwhile, the West Virginia House of Delegates now turns its attention to consideration of legislation previously passed by the Senate.

The main topics of discussion during the Eastern Panhandle Legislative Caucus this morning were Homeowners Association issues, the Homestead Exemption Act, and a modest increase in State Trooper salaries.

Due to the complexity of the issues, there will be an effort to include Homeowners Association issues in a legislative interim study committee during this Summer.

A modest increase in State Trooper salaries (HB 4281) also is pending action by the House of Delegates.

Click on the link below for this recent news story, and, to discover more political insight about the dynamics of today's ongoing issues, also click on "Mouseland, a Fable for Our Time" (under "Videos" on the right hand side of this webpage).

http://www.journal-news.net/page/content.detail/id/575736/HOA-issues-gaining--ground.html?nav=5266#.T0tetcOXMR8.email
Posted by Larry D Kump at 5:45 AM No comments:

Click on the link below to read this newspaper editorial:
http://www.morganmessenger.com/news/content/story-9070
Posted by Larry D Kump at 11:08 AM No comments:

HB 4555 would exempt the first $20,000 in pensions and social security benefits from West Virginia income taxes.

HB 4563 would save West Virginia taxpayers many millions of dollars by revising the method that wages are set for public construction projects.

Click on "WV State Legislature" under "Links" on the right hand side of this webpage for more legislative information.

The House of Delegates Committee on Constitutional Revision today recommended passage of an amendment to the West Virginia Constitution to give counties the option of increasing homestead property tax exemptions for senior citizens and the disabled (HJR 113). The committee also recommended passage of a constitutional amendment to enable the Legislature to provide property tax relief for individuals actively serving in the armed forces (HJR 114). Further consideration of both of these proposals now will be reviewed by the House of Delegates Finance Committee.

Since both the above proposals are constitutional amendments, a two-thirds approval vote also will be required by the Legislature and thereafter a majority approval vote by voters in the next election before the proposed amendments become law.

Mr. Murphy explained that West Virginia still is waiting for specific federal budget project funding for about $400 million. He also reported that the I-81 widening project between Marlowe and the Potomac River should be completed this year. Discussions also are ongoing with Maryland regarding the widening of the I-81 bridge over the Potomac River. Improvements to Rt 9 from Martinsburg to Berkeley Springs as well as Rt 522 also are under review. The caucus also requested that a turn lane be added to Rt 9 at the site of the new Division of Motor Vehicles office.

Much concern and frustration was expressed by the caucus about the West Virginia County Commissioners Association opposition to helping senior citizens get additional property tax credits.

HB 4476 would reform the West Virginia Freedom of Information law to make it easier for citizens to get non-confidential information from state government agencies.

HB 4478 would give state police a modest pay raise and establish a minimum staffing level.

More information on these bills and other legislative issues is available by clicking on "WV State Legislature" under the "Links" section on the right hand side of this webpage.

The need for passage of Homestead Exemption improvements and other property tax credits for senior citizens were discussed. Included in these efforts are HB 2672, HB 4339, and HB 4369.

We still are waiting on the West Virginia State Rail Plan and how it will affect the Maryland Area Regional Commuter (MARC).

There has been no progress on HB 3256 (end times for bars serving alcoholic beverages).

SB 362 (Cacapon State park) still is being considered in the Senate.

HB 4412 would create another judicial circuit in the Eastern Panhandle.

Concerns were expressed about funding of roads and a representative from the West Virginia Department of Transportation will be invited to a future caucus meeting.

Energy is a tremendous West Virginia natural resource, and the non-partisan efforts by the West Virginia Legislature and Governor to attract developers of our Marcellus gas deposits are praiseworthy indeed.

Hopefully, these efforts will result in protection for our environment, more good paying jobs for our citizens, and additional revenue for our State Budget (that can and should be used to reduce our other taxes).

Wouldn't all of us Mountaineers be so much better served if the tax breaks and other incentives given to the Marcellus gas developers also were given to all West Virginia employers?
Posted by Larry D Kump at 5:48 AM No comments: