On behalf of the West Virginia Municipal League, Mark Baldwin asked the caucus to support legislation to do an in-depth study of West Virginia's property tax.

Mayor Karos expressed support for increased "real-time" reporting by pharmacies of sudafed sales. (Note: This proposal would not require a prescription to purchase sudafed.)

The ongoing development of the West Virginia "State Rail Plan" in regard to the Maryland Area Regional Commuter (MARC) was discussed.

SB 347, to use some of the property transfer tax income to help fund Regional Jail costs, was discussed.

Legislation to provide more property tax relief for senior citizens and the disabled is in the process of being drafted. 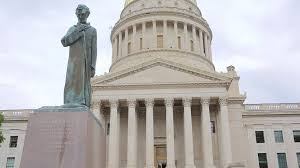 HJR 102 and HJR 103 are two of my proposals to amend the West Virginia Constitution.

HJR 102 prospectively would limit state legislators to no more than eight consecutive years as a Delegate or Senator.

HJR 103 would require a new office of West Virginia Lieutenant Governor to also serve as the Chairperson of the Public Service Commission (PSC), thus providing more accountability to voters by requiring that the PSC Chairperson be an elected official.

Click on the link below to read the newspaper editorial lauding public access to citizen petition signatures.

http://www.journal-news.net/page/content.detail/id/574151/Protection.html?nav=5003#.TyQFRBmRQX4.email
Posted by Larry D Kump at 9:25 AM No comments:

A major topic of discussion was the drug abuse epidemic and ways to deal with it, including drug testing. There also was intense discussion about prison overcrowding, sentencing guidelines, and rehabilitation programs. There will be further meetings on this issue by the caucus.

SB362, to complete the improvements to Cacapon State Park, was discussed by the caucus. 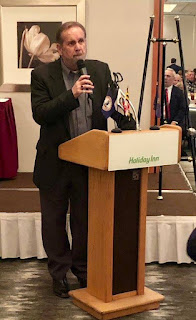 Sadly, many otherwise well-intentioned elected officials sincerely believe that more government control over our lives (and the taxes to finance it) is best.
They are wrong, so wrong.
One instant example is the renewed push in the West Virginia Legislature this year to require  a doctor's prescription in order to purchase sudafed.
Because of drug addicts using sudafed to manufacture the illegal and devastating drug Meth, West Virginia previously required the over-the-counter sale of sudafed to be purchased directly from the pharmacist, without a prescription, but with the proviso that customers had to identify themselves and sign for the medication prior to purchasing it.
Drug addicts quickly circumvented this requirement by buying their sudafed supplies at multiple pharmacies.
This sudafed prescription requirement legislation passed the House of Delegates last year, but was narrowly defeated in the West Virginia State Senate.
This year, the same legislative push will be made again, and now it even is going to be named after the late Delegate Larry Border, who was a pharmacist.
This is yet another example of government punishing the many because of the bad behavior of a few.
If this legislation is passed, working West Virginia families will have to schedule a costly visit with their family doctor and get a prescription in order to get what previously was an over-the-counter medicine: all because of drug abusers.
Other Mountaineer families, who live in our border counties, simply will step across our state line to buy sudafed elsewhere.

This is not the first time that inventive abusers have found new ways to pursue their addictions.
Common bath salts also often are used for such nefarious purposes.
Further, alcoholic youth often buy vanilla extract, because of its high alcohol content, at neighborhood grocery stores.

Addicts "huff" the vapor in "Redi-Whip", and I'm told that even kitty litter can be used to manufacture addictive drugs.

As a former Criminal Justice Prison Case Manager, I have intense and up close experience with the tragic outcome from the manufacture of and addiction to Meth, not only to the addicts but also to public safety and our neighborhoods.
However, instead of punishing all of us, a more prudent solution simply would be to first try to effect a better coordination of the record of sudafed sales at drug stores with law enforcement, thereby targeting the offenders and not the law abiding public.
You know,these overly broad and ham fisted legislative oversight proposals remind me of a situation years ago in New England, where it was reported that someone had filled a "Super-Soaker" water gun with bleach and subsequently had inflicted great harm. The reaction of a few legislators was to attempt to include water guns as dangerous weapons.
I will be voting against the sudafed prescription proposal.

An amendment offered this morning in the West Virginia House of Delegates by Delegate Tim Armstead would have increased the rights of citizens under current law.

His amendment (1-17) to HB 2402 would have allowed us more access to non-confidential government records. 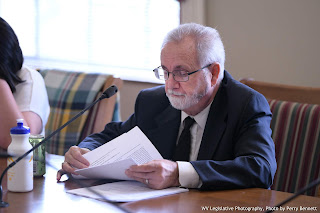 Dealing effectively with criminals and safeguarding our citizen rights and responsibilities are important public policy issues.
That's why I've introduced HB 4079, HB 4080, and HB 4081 in the West Virginia Legislature.
Our current criminal justice system is seriously out of whack, and it's costing taxpayers a huge amount of money. It's also becoming a serious burden to the the ability of state and local governments to make budgetary ends meet.
West Virginia needs to walk away from the "lock 'em up and throw away the key" approach to all crimes, and instead focus on our public safety from those who truly endanger us and our families.
To that end, we need to develop reasonable alternatives as to how we deal with drug abuse and other crimes, but also be much more diligent in protecting us and our families from violent criminals.
HB 4079 does that by making those convicted of Murder, Rape, and Child Abuse ineligible for parole.
In regard to our sacred citizen rights and responsibilities, HB 4080 would give each of us more clout at the ballot box by requiring single member districts in the election of Delegates to the State Legislature, and HB 4081 would give citizens who participate in petition drives on ballot issues the same personal privacy rights as voters in elections. 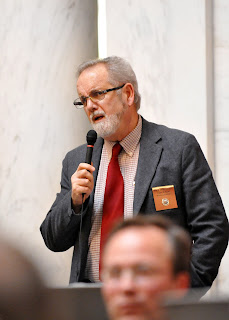 If passed into law, HB 2705 would exempt West Virginia from federal regulation (under the Commerce Clause of the Constitution of the United States) of firearms, firearms accessories, or firearm ammunition manufactured and retained in West Virginia.

All firearms regulation under the above circumstances would be under West Virginia law, as guaranteed by the 2nd and 10th amendments of the United States Constitution.

Click on the link below to read this news story:

http://www.journal-news.net/page/content.detail/id/573248/Local-lawmakers-talk-about-redistricting--OPEB--prison-overcrowding--drug-abuse.html?nav=5006#.TwhkeLJRa0I.email
Posted by Larry D Kump at 10:27 AM No comments: