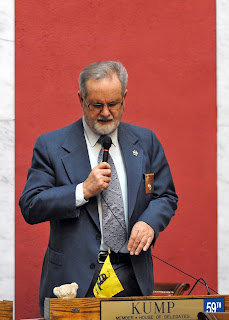 Early this morning, while continuing to ponder about the duress of choosing between participating in a special session of the West Virginia Legislature this Sunday (the Lord's Day) and my duties and responsibilities as a legislator, a passage in the New Testament of the King James Bible helped more fully persuade me to err on behalf of fulfilling my legislative Oath of Office.

"Submit yourselves to every ordinance of man for the Lord's sake: whether it be to the king, as supreme; or unto governors..."
(1 Peter, Chapter 2, Verses 13-14).

Note: Other entries on this issue as well as comments from others on the entries are listed herein at this website under "Sad" and "More on Sad".
Posted by Larry D Kump at 10:52 AM 2 comments: 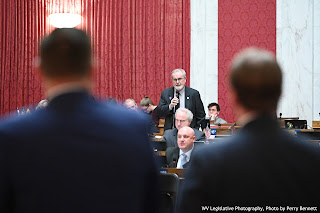 I just wanted to take a moment of your time and let you know that I have discovered your website, read it, approve of it, and wish ever so much that you were an Ohio legislator.
I wish you the utmost best of luck in your political career.
Our great nation needs many more like you.
Sincerely yours,
Mark Barone
Ohio Citizen"

For sure and for certain, may God bless you all real good!

More on "Sad", from an upset Mountaineer citizen 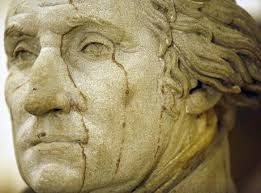 No, he's just a politician doing what they do best - Thumbing their noses at God.

Whether it's taxing the poor on their groceries, or fleecing the rich, just because there's always an open season on greed (class warfare).

I'm disgusted at his choice.

What a contrast to our Foundering Fathers. They opened sessions with prayer - sincere heartfelt prayer; not some clergyman who shows up to read a speech and call it a prayer (They don't even shut their eyes - they don't address Deity, they just read a speech).

Larry, do your duty. But, let them know that even if they don't believe in the Sabbath, we expect them to respect it.

Thomas Jefferson said the people get the government they deserve. Well, at least some of them.

Note: See comments from others on this issue, under "comments" at the end of the previous "Sad" entry. 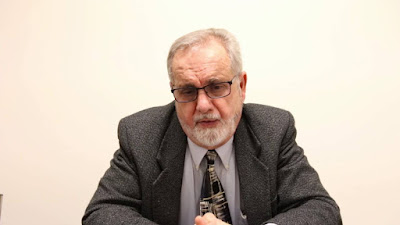 "It's simply so sad that the West Virginia Governor called a Special Session of the Legislature for the Lord's Day (Sunday), and also right in the middle of the day (Noon, November 13th) when many folks participate in worship services." -Delegate Larry D. Kump

Postscript: The Special Session was for the purpose of certifying the recent special election for the Governor, a formality vote that only will take a few minutes, but the added irony to all of this is that an Interim Session of the Legislature already had been scheduled for the next day (Monday, November 14th). The Governor could have called this Special Session to coincide with the Interim Session which starts on Monday and, in the process, also saved taxpayers additional expenses.