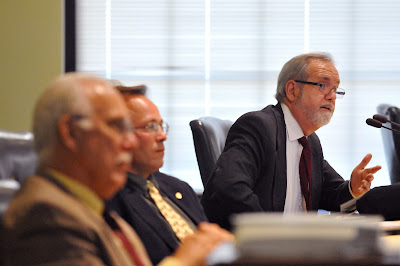 I have known Larry D. Kump for four years, and in those four years, I have known Larry to be truthfully honest and a conservative who cares for the citizens of West Virginia. I believe Larry will serve his district as delegate to West Virginia with the wishes of conservative voters to lead this state with good upstanding values. Larry is running for the House of Delegates in the Republican May 8 Primary Election, District #59, Morgan-Berkeley Counties.

Larry served two terms as delegate from 2010 – 2014. His desire to re-enter public service comes from the voters who know him, and after lots of praying, has decided to run again. Larry has always stood up and spoken out on behalf of less intrusive government, and his stand is no different than before.

Larry doesn’t go along with what makes him popular with those who want him to just go along with it. He doesn’t stand up and look around at what the crowd is doing and then sit down. He doesn’t mimic what the crowd is doing. He stands up for We the People, the good-upstanding citizens of this state and what they want – by his actions. He stands up for what he believes in – our Constitution.

Larry is a true Constitutionalist who believes in the articles of the State and Federal Constitutions who stands and salutes our flag.

Larry wants to keep spending down in Charleston and not increase our taxes, and he does not believe in big government. Larry will ask accountability for our schools, better treatment of our teachers and state employees and safeguard our pro-life family values.

He is aware of the opioid epidemic and proposes mandatory drug abuse testing for all state legislators, and reforming ill-advised laws, making it too difficult for the repentant and redeemed to re-enter the workplace, to become self-sufficient and tax-paying members of our communities. Larry wants to improve our highways, reduce gasoline prices, have better broadband and cell phone access, and eliminate state taxes on our social security benefits pensions.

Larry believes the persistent problem of West Virginia's aging and declining population adversely affects all of us, even including our representation in the U.S. Congress. In reviewing our state government policies and tax structure, a serious study of how to reverse this decline also should be undertaken, and he has been working on some ideas to turn around this problem.

Footnote: Send your campaign contributions, whether modest or magnanimous to -

Also, please share this message with others, asking them to go and do likewise with even more others.

And may God bless you all real good!
Posted by Larry D Kump at 8:34 AM No comments: