Another Concerned Citizen Chimes In

Hi Larry,
I do enjoy reading your messges.

I keep you in my prayers, that you might be not just successful in your effort in West Virginia, but HIGHLY successful in bringing common sense and Constitional reform...

Bev
Posted by Larry D Kump at 9:23 AM No comments: 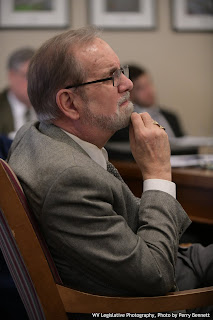 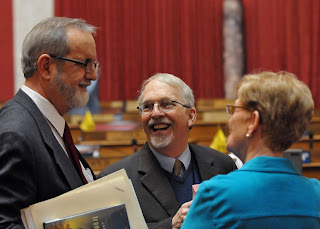 Kump seeking seat in the House of Delegates 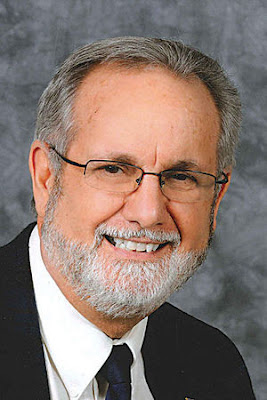 From the Morgan Messenger newspaper, February 17, 2010:

Larry D. Kump says Republican leaders persuaded him to be a candidate for the West Virginia House of Delegates, District #52 of Northwest Berkeley County and a small section of Eastern Morgan County.

“All of these folks bust a gut every day to make their diminishing financial ends meet,” Kump said.

He described himself as an independent Republican who considers himself as a populist libertarian.

An advocate of fiscal restraint, with legislative drafting experience, Kump proposes a restructuring of West Virginia taxes and elimination of property taxes on family vehicles as well as the taxes on groceries and home heating fuels.

He points out that many local residents purchase cheaper gasoline in Maryland and Virginia, depriving West Virginia of tax revenue, and demonstrating the need for a reduction and restricting of West Virginia gasoline taxes.

A proponent of “common sense” health insurance reform, Kump is a former public sector labor leader who proposes that a good first step would be to mend West Virginia’s own exorbitant Medical Malpractice rates via tort reform. High medical malpractice rates have contributed to an exodus of qualified doctors and other health care professionals from West Virginia and higher medical expenses for all, he said.

He said he looks forward to working with other legislators to enhance family preservation incentives and protect individual rights.

He is a graduate of Hagerstown Community College, Frostburg State University and the Maryland Correctional Professional Staff Academy.

Kump has two children and is a member of the Hedgesville congregation of The Church of Jesus Christ of Latter-day Saints (LDS Church).
Posted by Larry D Kump at 6:23 PM No comments:

Email ThisBlogThis!Share to TwitterShare to FacebookShare to Pinterest
Labels: announcements

Kurt Vonnegut, Jr., in "Cat's Cradle", described a meaningless event as a "Granfalloon", and, sadly, some view their own lives in that way.

As indicated below, we all stumble, but it is our compassion for others and our perseverence in faith that lifts us up to be more than we otherwise ever could be.

In the 1992 movie, "Leap of Faith", starring Steve Martin and Deborah Winger, there is a musical number which tugs at heartstrings.

I don't now remember the name of the song or even most of its lyrics, but part of the chorus went something like this:

The rest of the song's lyrics are intensely uplifting and go on to strike powerful and positive chords about finding joy in the purpose of life.


A better and even more accurate perspective of how we should approach life is embraced in the song "Hallelujah" by "The Canadian Tenors" (click here for a link to the musical video).


Note: The link to the Canadian Tenors does not imply any political endorsement by them.
Posted by Larry D Kump at 9:16 AM No comments:

Email ThisBlogThis!Share to TwitterShare to FacebookShare to Pinterest
Labels: videos

The Voice of "Reason"

"Individualist in the Oddest Place"

When he recently took up genealogy, Larry D. Kump was thrilled to find that he is a kinsman of Patrick Henry.

The last place you'd expect to find Henry's literal or spiritual descendent is at the head of a public workers' union. But Kump, Executive Director of the Indiana State Employees Association (ISEA), is no ordinary union boss.

For one thing, he runs a voluntary group and doesn't think workers should be forced to join a union in order to work for a unionized employer. "Sometimes employees need to be protected from the caprice of their own union, and an open shop is the best way to do that", he says.

He isn't a typical public-employee advocate, either. Most unions, especially those of government workers, fiercely oppose privatization. But Kump, a fan of science-fiction writer Keith Laumer's satires of bureaucracy, supports some efforts to shrink the state. "I don't think any services ought to be provided by the government just because they always have been."

ISEA has proposed legislation that would require the state to demonstrate that a job is really necessary before replacing any employee who quits. The bill would also require cost-savings and accountability studies of any proposed privatization of government services.

But Kump wants wants government either to do a job itself or to get out of the business completely-not to hire private contractors. "The problem with contracting out is you don't want it, as with the Pentagon, to be underground political patronage, often tied to 'contributions' to politicians".

A handful of career state employees formed ISEA in 1953, Kump says, because "they were tired of scurrying to save their jobs every four years." The union has been fighting patronage ever since, but politicians still control about one third of state jobs. With the Indiana Libertarian Party, ISEA has filed suit to overturn the system. The Republicans, who dominate the state, have tried to have the suit dismissed, to no avail.

ISEA also has championed the rights of whistleblowers. "Nobody knows what's wrong with government more than government employees", says Kump. After a four year fight, the Legislature enacted ISEA legislation that protects the rights of state workers to belong to unions, to participate in political activity, and to report corruption without fear or reprisal. ISEA then got the law amended to add criminal penalties for those who harass whistleblowers.

ISEA receives whispered phone calls revealing political corruption. It cooperated with the press and FBI in investigating a scam in which state corrections department officials skimmed state funds and inmates benefits for personal use. Among other misdeeds, reports Kump, the department's commissioner (who came to Indiana from West Virginia) used state funds to restore his already lavish home, even goldplating the bathroom faucets.

Kump didn't plan on a career as a union leader.

In junior college (Hagerstown, MD), he edited the school paper and managed to offend the administration with his libertarian approach to students' rights. "They were so upset that they took away my scholarship which I was supposed to get as a perk for being editor", he recalls.

After college (Frostburg State University), he was chief aide to the Pennsylvania Republican Senate leader, then spent time working as a Labor relations Specialist for a public workers' union (Maryland Classified Employees Association - MCEA), before moving to Indiana.

In Kump's eight years as the Indiana union's Executive Director, it has grown in membership - despite a 20 percent reduction in the total number of state workers. (Indiana is the state with the fewest public employees per capita.) ISEA is now the state's largest public employee union. But Kump has paid a steep personal price for his success.

Kump says that, after encouraging him to take the job, his wife decided she couldn't put up with the long hours he was working.She left him and he was diagnosed with cancer.

"When she told me that she was moving back Easy with our two kids, that upset me more than finding out that I had 'terminal' cancer." An operation took care of the cancer, but his wife is still gone. Kump, a member of The Church of Jesus Christ of Latter-day Saints (LDS Church), lists himself on his business card as "Father of David & Sarah".

The union's success - often at the expense of the American Federation of State County & Municipal Employees (AFSCME/AFL-CIO) - has also drawn unwanted attention from the Teamsters. Without his knowledge, Kump says, "One of our staff cut a deal on the side with the Teamsters. A Teamster representative came into my office and said, 'We're going to get your membership anyway, so why don't you do it the easy way, and we'll give you a similar position-and save you the embarrassment of being run out of the state.'".

The man told him, says Kump: "You have trouble with anybody, you point him out to us, and we'll punch him in the nose." Kump thought he was kidding, but "then saw that he was serious. I told him to do what he could and if they could take over, I'd get a job slinging hamburgers."

In a free market, Kump is confident that this brand of union leadership sells best.

Footnote - The above condensed and edited magazine article was and is not an election endorsement of Larry D. Kump, who was a 2010 candidate for election to the West Virginia Legislature.You may contact Reason magazine at www.reason.com. Contributions also may be made to Mr. Kump's election campaign at: